I know that some may be thinking that this is actually a post about fashion. To a certain degree, you may be correct. But there are aspects of fashion to which some are oblivious, and so I feel that it is important to address this fact when it comes to the Craft. After all, not many people are even aware that a crown when worn by a Royal represents the heavenly halo. This is because Royalty was once considered something that was Divinely appointed. Royal bloodlines, therefore, became extremely important. It was not just about politics, but about preserving Divinity within a bloodline. Sounds nuts, doesn’t it? But for centuries this practice has existed.

For centuries magical people have worn the Witch Hat. This was a bit of a status symbol, indicating that the practitioner had undergone intensive training in the magical arts. One did not just don a Witch Hat. One EARNED the Witch Hat. It took years to earn it. The training was gruelling at best. It required the practitioner to abandon absolutely all preconceived notions of who he or she was, and to be put through a series of tests that would require mental and physical prowess. Only after all the tests were passed did one go through the initiation ceremony wherein one would receive the Witch Hat. Think of it much like a convocation ceremony at the University level of today’s academia. The participants are given a robe and a hat for the ceremony. These days they are often rented and then returned. The Witch Hat was never returned. It stayed with you. And if it got worn out, it was immediately replaced. Much the same could be said for the Witch’s Robe. I will, however, get into that in a later blog. So the Witch’s Hat was an indication of accomplishment in the magical arts. Anyone who saw someone wearing one would know that they are highly trained and highly skilled. They would also know that this person could be trusted to assist them if they were in trouble. 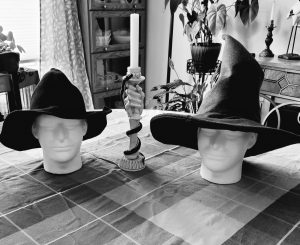 So why was the Witch’s Hat so important? Besides the wide brim protecting one’s eyes from the sun and creating shelter from the rain, the shape of the Witch’s Hat is vital to chanelling energies. The wide brim of the had represents the magical circle. The conical shape of it is similar to that of an evergreen tree. The evergreen is the only type of tree that keeps its folliage in the deep of winter. And many people do not know that the evergreen tree also energetically draws energy from the sun, moon and stars and brings that energy into the Earth to charge and nourish the Earth’s body. The same can be said for the conical shape of the Witch’s Hat. It serves to draw energy down from the sun, moon and stars and energize and charge the magical practitioner with those energies. This is why the sun, moon and stars are also just as important to the magical practitioner as is the Earth itself. All of it is interconnected on an energetic level. Witch’s Hats are also reputed to enhance one’s intelligence. This is why (for those of us old enough to remember) the “Dunce Hat” was used in school for when one was acting naughty. The conical shape was to help, hopefully, to enhance the brain activity of the person who was wearing it. It was never really supposed to be something used in this manner, which is demeaning at best. This is the reason that this blog is not just about fashion. The Witch’s Hat is an actual magical tool.

Now, I am not saying that I personally wear my Witch’s Hat every day when I am doing my work. I don’t like to think of myself as that dependent upon any magical tool. I, myself, am the most important magical tool in my life. (Yes, I just totally called myself a tool! Haha!) Everything else helps and boosts what is already there within me. But I do wear my Witch’s Hat now and then, especially in ceremony that involves sending energy in any particular direction for any particular purpose. The smaller black hat is used most often, but if I am going to require a major boost, then I use the larger grey hat.

There have been times in my life when I have felt completely drained of energy, sometimes as the result of an illness, and sometimes as the result of an energetic parasite (spiritual or human). When this happens, I often find that wearing my Witch Hat and going into meditation will help tremendously. The energy that is transferred into my being is abundant and, once filled up, I have energy to burn for a very long time.

If you are a practitioner of the Craft, and have not had the training that earns you your Witch Hat, but have acquired one through ordering online or through a costume store, I encourage you to not degrade it by simply wearing it for a Halowween costume. At the very least, have your Witch Hat blessed (by myself or another practitioner) and use it as a sacred ceremonial garment. I also encourage you to go deeper into your personal training in the Craft so that you can indeed wear it with honor and so that you can receive the deeper instructions in the Mysteries. You are worthy of such a thing. It does, however, require a LOT of time and a very deep commitment. All of that, however, will enrich your journey beyond measure.